A few weeks ago we purchased a Google Home for the office in order to investigate the relationship between Google Voice (Google Assistant) and SEO (specifically, featured snippet results). I thought it was so handy I bought one myself. Inspired by Dr. Pete’s initial foray into it, I wanted to provide more detail with my own observations. I recommend reading his post first, so you have an understanding about the relationship between Voice and Featured Snippets.

Does Google Home Have a Home?

First, a bit about the product itself. I thought for sure this would be a novelty and not really find an organic function in daily life. However, the more I got used to the fact that it was around, the more situations arose in which it was helpful. Many times during a meeting or conversation we could simply ask Google. This immediate injection of “facts” without having to break personal connections with the interruption of a phone or computer was very seamless and in a way, natural. Almost like another person sitting at the table who is chock-full of facts. I could see Google Home even stopping arguments with your significant other before they even begin.

The unit itself a lot smaller than I thought it would be. It isn’t much taller than a highly-prized canned pint of Master Shredder from The Veil:

Alright, by now you’ve learned Voice Search results are essentially Featured Snippets in a narrative fashion if you read Dr. Pete’s post. Below I’ve documented specific observations of that relationship, where it goes wrong and where it goes right. Let’s dive in!

Disclaimer: These results are constantly changing and are only individual examples. Each of these will likely change over time as Skynet continues to listen to our conversations 24/7. I mean as Google accesses only the data you want them to.

There are three different kinds of featured snippets: paragraph, list, and table. Through the hundreds of comparison queries, it is clear that Home favors paragraph formats. I suspect this is because they are more applicable for voice, as the narrative is essentially built-in. It will sometimes swap out tabled or listed featured snippets with a paragraph instead.

For example, the desktop search for “what is the most popular dog breed in the unites states” reveals a table: 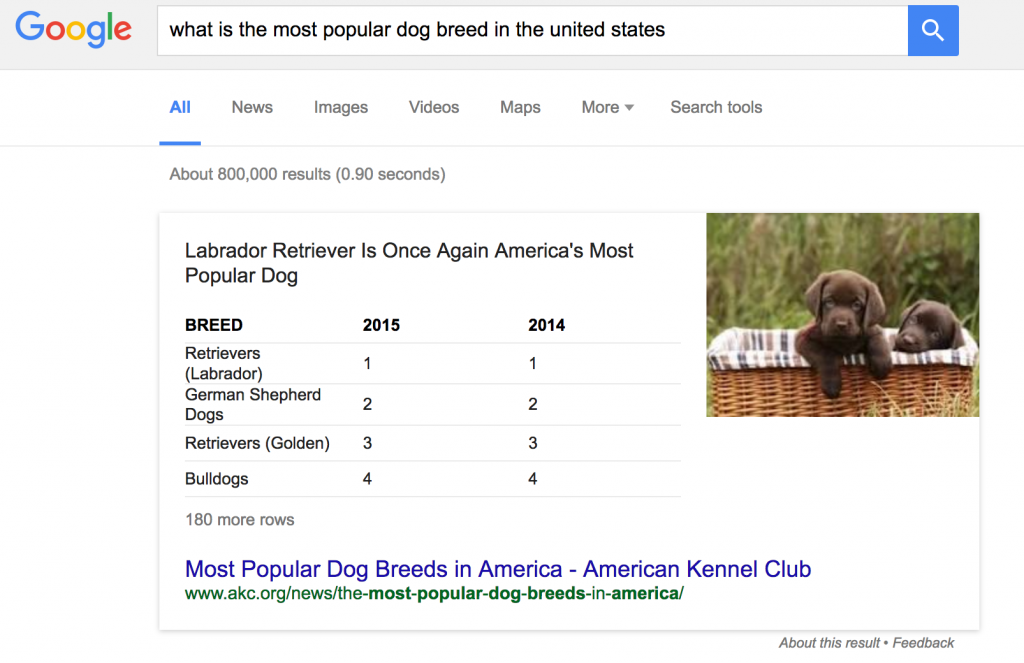 But on Google Home the result is in narrative format from a completely different source:

“According to Today.com, Today’s puppy Wrangler (apparently this is a puppy who lives on the Today Show), a Labrador retriever, is the most popular dog breed in the United States for the 24th straight year, according to the American Kennel Club”

“Your money or your life” sounds like what a mugger would say to you in a dark alley, but in fact it is a category of queries straight from Google’s search quality rater guidelines. In a nutshell, human raters were specifically told to judge any query and their results with more scrutiny if they have to do with health, wealth, or well being. Below is only one example, but I’ve tried this with queries related to credit cards, investing, banking, etc. and it seems overall there is extreme hesitation in returning a definitive result.

For example, the desktop search for “what is the best checking account” brings up a bulleted FS:

In contrast, Google Home refuses to read this aloud:

Yet? Yet!? How much do you want to bet this query is being saved for the eventual introduction of paid voice results? I’m serious. Hit me up on Twitter to place your bet.

Video is technically not one of the 3 formats of featured snippets, but I wanted to include an example because I always find it interesting when this happens. Videos are extremely engaging, and above that, when this happens it usually represents a single representative video which can answer the query. You have to admit, it is extremely hard to come by now that there are 20 different YouTube videos about every single thing you can think of.

The desktop search for “what is the irish washerwoman” is a video result (in normal Web search): 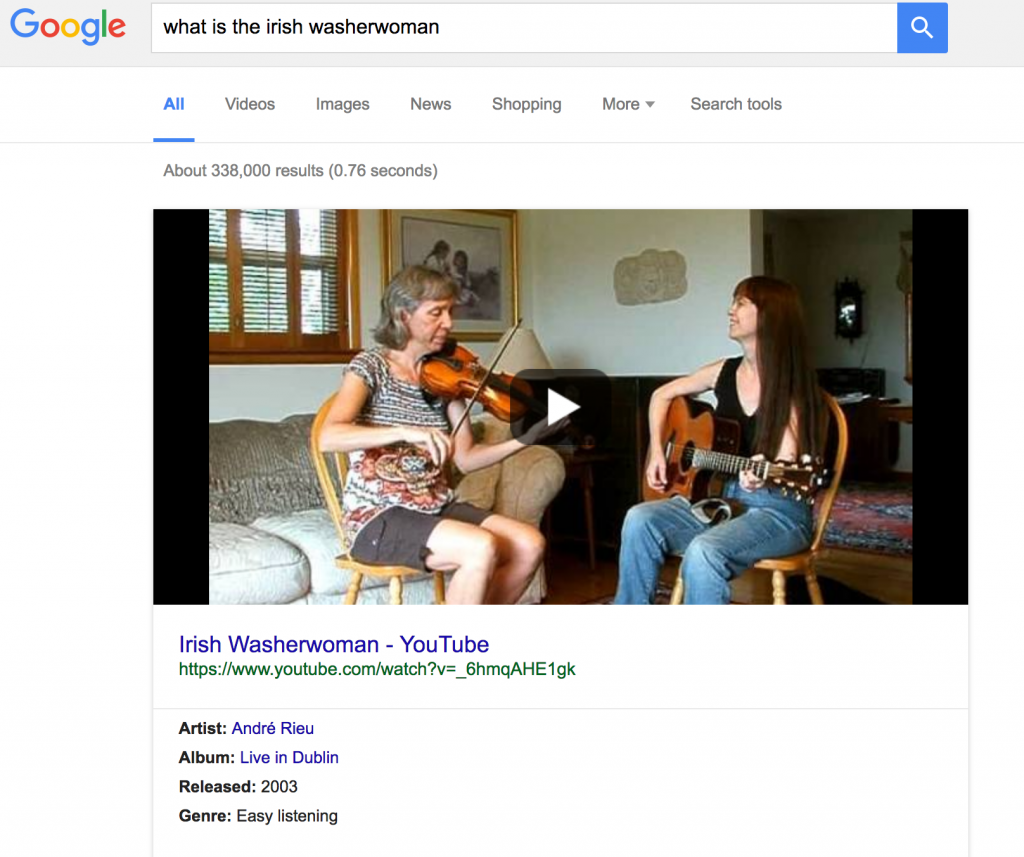 This one is interesting because within the structured data via YouTube, Google knows this is a song (with attributable artist, album, and release date). So, why not just play the audio through Google Home?

First, let it be known that I do not have a language preference set in my Google account which would influence this. I assume Google just gets a feel for your language over time, but technically speaking if you never set it, you should be able to search in different languages. Also, the Google account I am searching from on desktop is the same one I am logged into on Google Home, thus all the same settings would apply.

On Desktop, the query “who is Ragnar Sigtryggsson” 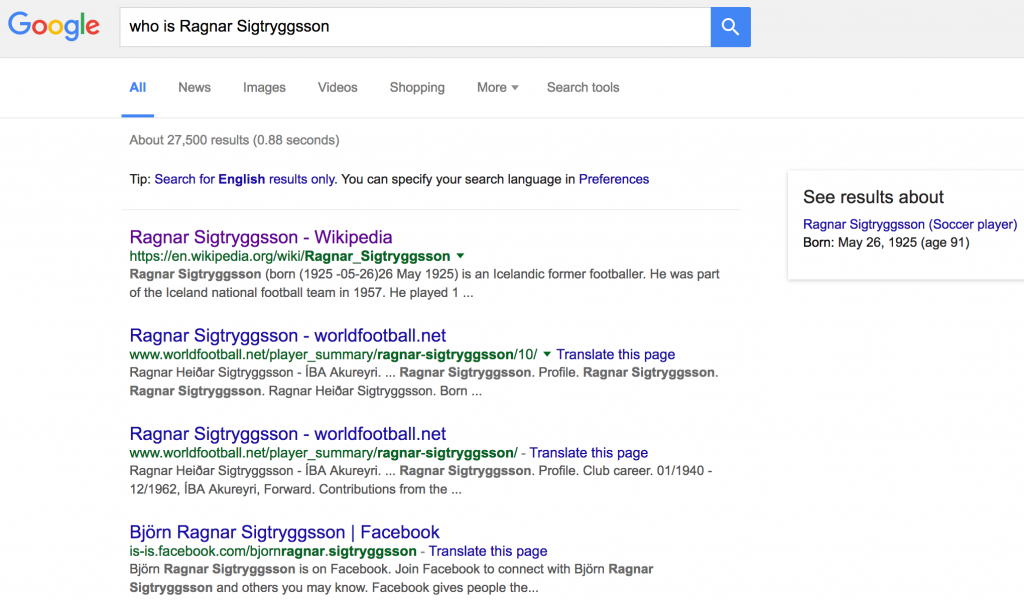 “According to Wikipedia, Ragnar Sigtryggsson is an Icelandic professional footballer who played a center back for the English championships for the Iceland national team.”

Amazing. This time, there is no featured snippet to be seen on desktop or mobile, and instead Google thinks I’m searching in the wrong language and presents me with the option to search English results only. Furthermore, the correct response about the Icelandic soccer player is given only on Google Home! Even more interesting about this result is that I could not find the exact verbiage from the spoken result on the Wikipedia page. I even went to the Icelandic Wikipedia to search but there were no results.

5. Numbered Lists Are Preferred If They Are Steps in a Process (Not As Ranked Items)

Of the three types of featured snippets which trigger voice results, I’ve noticed numbered lists are the least common, second only to tables. A major theme I am seeing is that numbered lists are only read aloud if they are steps within a process that need to be followed as orders of operation. Rankings (like “what are the best X”) which might show on desktop as numbered lists, won’t be read as such on Google Home.

For example on desktop, “how to make french toast” 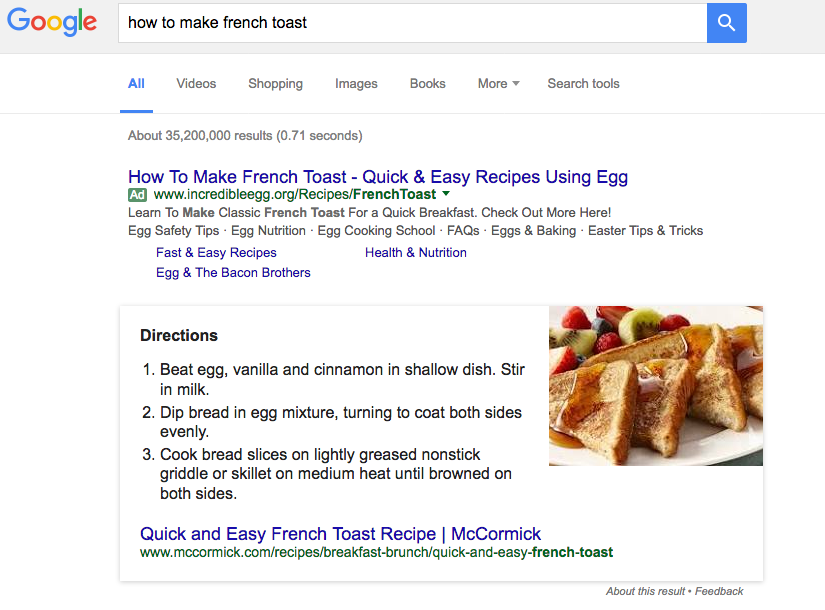 “According to McCormick, beat egg, vanilla and cinnamon in shallow dish. Stir in milk. Dip bread in egg mixture, turning to coat both sides evenly. Cook bread slices on lightly greased nonstick griddle or skillet on medium heat until browned on both sides.”

So, here is a very simple process with a specific order of operations given exactly the same on desktop and voice.

6. But Not If It’s A Complicated Process!

Numbered lists as orders of operations only really work for simple tasks like making breakfast. Other results which show numbered list featured snippets on desktop and mobile, and are still steps in a process, won’t show if Google can’t sufficiently describe that process through narrative alone.

For example on Desktop: “how do you make a hologram” 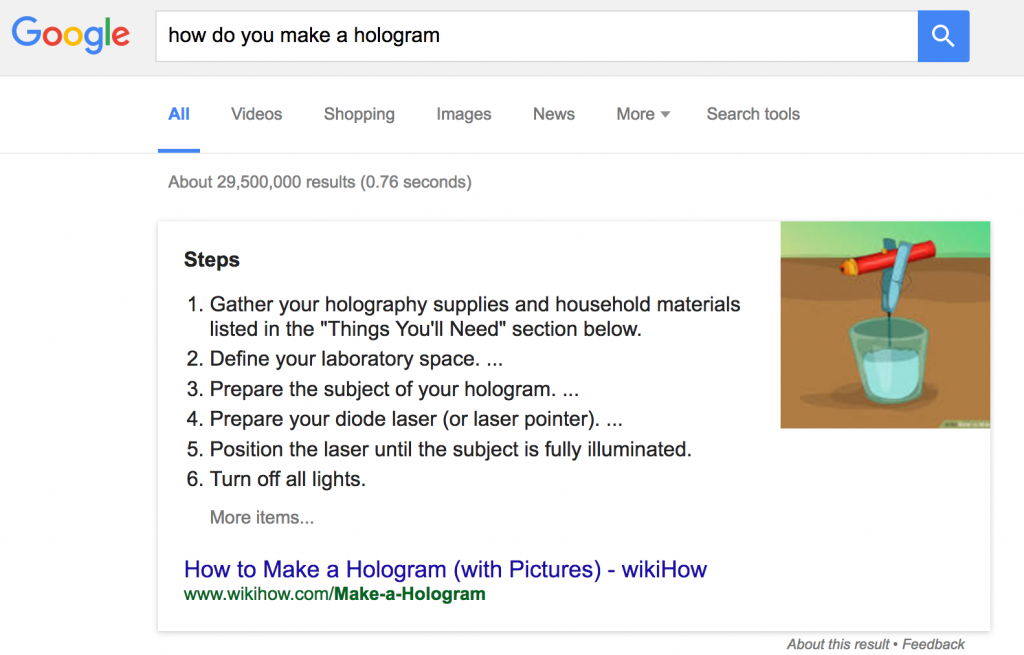 On Google Home, we get:

“Sorry, I’m not sure how to help with that.”

Clearly the desktop featured snippet isn’t even a good one, as there’s no way you’d be able to build a hologram with the information provided. But in the context of voice search, it’s almost like Google knows that result sucks, so it doesn’t even risk confusing the user and instead just opts out altogether. So, simple processes are OK to narrate, but not complicated ones.

7. It Treats Carousels Like Bulleted Lists (Not As Ranked Items OR Steps)

Carousels are not really featured snippets, but they are a type of rich answer. The carousel format is never numbered but usually has some implied ranking order to it, which as I previously suggested, Google Voice doesn’t really like.

On desktop: “what are the best colleges” 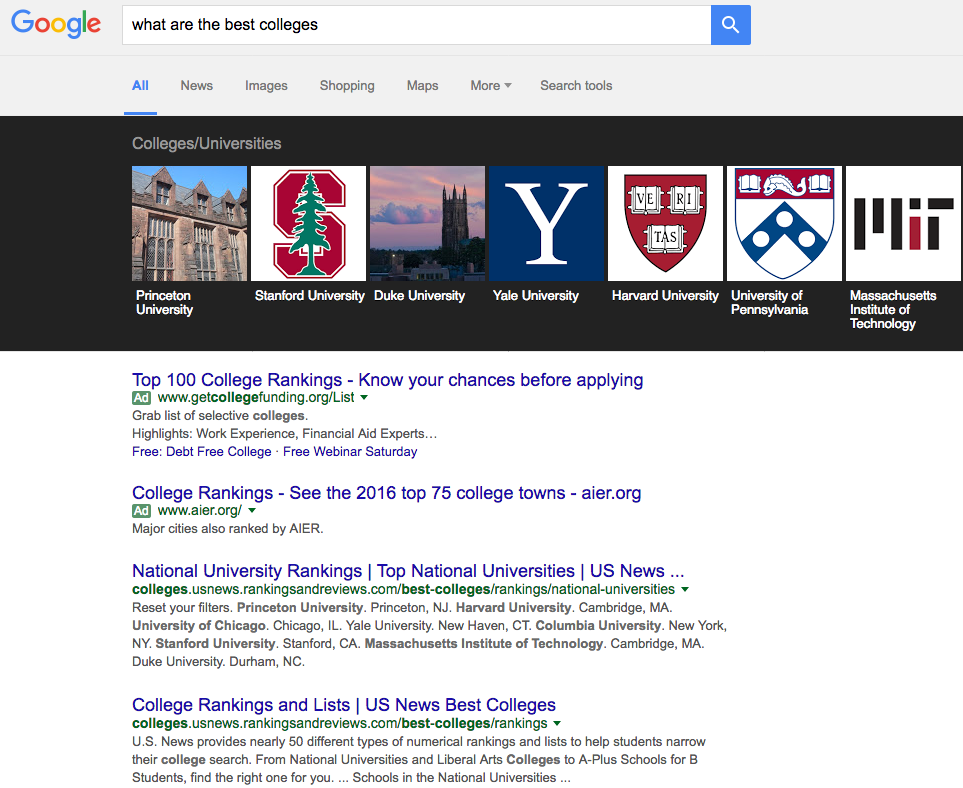 “Colleges. Universities frequently mentioned on the web include Princeton, University of Pennsylvania, Yale university and others.”

As you can see, the carousel results are read aloud, but not in their entirety and not in any particular order. Likely to combat rank-ordering the results, Google tends to skip around the results and narrate them in a purposely scattered manner, perhaps to avoid any misconceptions by the user (like an endorsement).

Overall there are a couple of major themes here:

There are a lot more I’ve found but these are some of the most interesting. Overall, there is a lot of improvement Google can make for all search results, but naturally the head terms will receive more attention than the long tail for development priority. What have you found with your Google Home or Google Voice? What do you think the future of search will be when voice is more prevalent than a traditional device?

Check out my newest project here.

Want to see what I'm up to today?

Check out my secret project here.